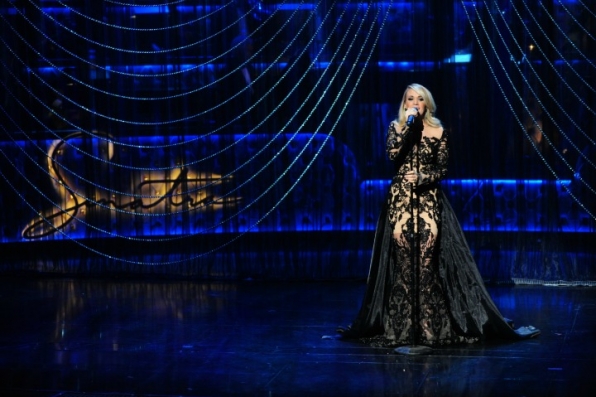 Country talent Zac Brown and Carrie Underwood performed during the televised Sinatra 100 — An All-Star Grammy Concert, marking what would have been Frank Sinatra’s 100th birthday.

Carrie Underwood put her own spin on the classic “Someone to Watch Over Me” and looked like an absolute dream in a cream and black lace gown.

Zac Brown cleans up real nice and took the stage for a rendition of the feel-good romantic tune, “The Way You Look Tonight.” The Zac Brown Band frontman clearly enjoyed his time in the spotlight— check out that huge smile!

The special Sinatra 100 program aired Dec. 6th on CBS. Besides Underwood and Brown, the concert also featured country music power couple Garth Brooks and Trisha Yearwood. Check out what Trisha had to say about her early musical influences below.

Celine Dion, “All The Way”
Adam Levine, “The Best Is Yet To Come”
Trisha Yearwood, “I’ll Be Seeing You”
Nick Jonas, “In The Wee Small Hours Of The Morning”
Alicia Keys, “I’ve Got A Crush On You”
Tony Bennett, “I’ve Got The World On A String”
Garth Brooks, “The Lady Is A Tramp”
Harry Connick Jr., “Luck Be A Lady”
Juanes, Medley: “Change Partners,” “One Note Samba,” “The Girl From Ipanema”
Zac Brown, Seth MacFarlane, Carrie Underwood, Medley: “Come Fly With Me,” “Bewitched,” “Stars Fell On Alabama,” “Learning The Blues”
Harry Connick Jr., John Legend, Adam Levine, Katharine McPhee, Medley: “Saturday Night (Is The Loneliest Night Of The Week),” “I Get A Kick Out Of You,” “You Make Me Feel So Young,” “My Kind Of Town,” “You And Me (We Wanted It All)”
Seth MacFarlane, “One For My Baby”
Carrie Underwood, “Someone To Watch Over Me”
Usher, “That’s Life”
Lady Gaga, “Theme From New York, New York”
Zac Brown, “The Way You Look Tonight”
John Legend, “Young At Heart”